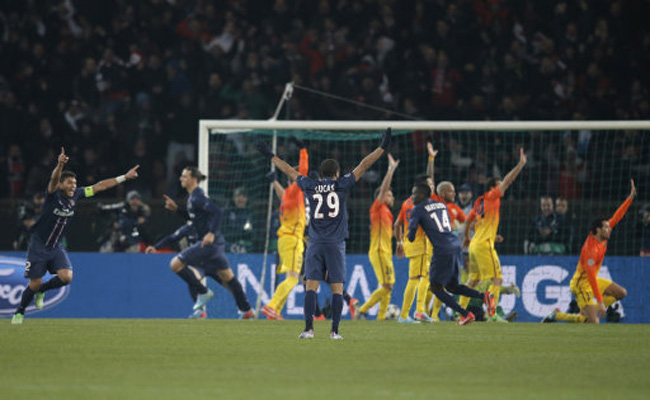 In a rather strange game in Paris, nouveau riche PSG came back twice against Barcelona to set up an interesting return fixture at the Nou Camp.

Despite making a quiet start, as the home side looked the more threatening, Barca  eventually opened the scoring on 38 minutes , courtesy of a close-range effort from Lionel Messi after a magnificent pass from Dani Alves.

With David Beckham struggling to make his mark in midfield and Zlatan Ibrahimovic having a bit of a stinker, the home side started to fade after the break, even though an injured Messi didn’t take part in the second period. However, with just 11 minutes to go, the big Swede fired home (albeit from an offside position) after a superb Thiago Silva header came back off the post.

However, once again, the visitors went ahead, this time courtesy of a Xavi spot-kick after Alexis Sanchez had been needlessly upended by Salvatore Sirigu in the box. But, that wasn’t the end of it, with Blaise Matuidi firing home from an Ibra knockdown with the last kick of the game. Although, Victor Valdes with be disappointing not to have stopped the effort, despite a minor deflection.

Barca will start the return leg as strong favourites but PSG are still in with a fair chance of causing an upset in Spain. So there.