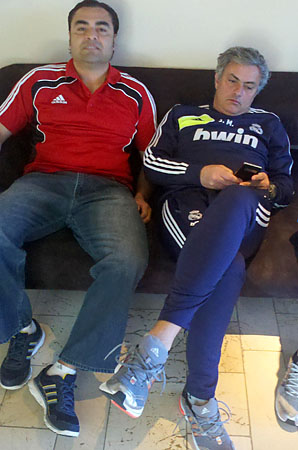 There’s a cracking bit over on Sports Illustrated.com today in which Grant Wahl tells the tale of Abel Rodriguez, i.e, the 41-year-old Mexican man who went from waxing floors in Los Angeles to being Jose Mourinho’s guest of honour at the El Clasico back on March 2nd.

Basically, Rodriguez has spent his last few summers taking a fortnight’s holiday from his day job to work as a volunteer at Real Madrid’s summer training camps at UCLA, assisting with setting out training pitches and collecting wayward footballs, etc, and after falling in love with Mourinho’s side, decided that he would like to go and see them play in Spain, specifically against Barcelona.

With nothing but a posie in his buttonhole and a skip in his step, Rodriguez made his way to Madrid to watch the El Clasico game against Barcelona a month ago but arrived in the Spanish capital a couple of days before the match without a ticket or anywhere to stay.

He then spent five hours sitting on the roadside outside the Bernabeu, thousands of miles from home and without a plan, until this happened:

“It was a miracle that I saw him,” Mourinho said. “I saw Abel seated on the road outside the training ground. I was leaving in my assistant Rui Faria’s car, and there are always a lot of people outside. But I told Rui, ‘Stop! It’s the guy from Los Angeles.’”

“Amigo! What are you doing here?” Mourinho asked.

“I came to visit you guys,” Rodriguez replied. “It’s my first time in Europe, and my dream has been to come and see games. I was hoping to see El Clasico.”

Rodriguez then explained the pickle he had gotten himself into, only for Mourinho to sort out a ticket for the game and a complimentary night in Real Madrid’s luxury hotel. The pair then had dinner together the night before El Clasico and discussed Madrid’s upcoming Champions League tie with Manchester United, with Rodriguez wishing Mourinho the best and thanking him for his kindness.

But as Rodriguez began talking about making his way back to Los Angeles, Mourinho piped up:

“I told him, ‘No way, you come to Manchester with us and work as a kit man. You help us and you live a bigger dream, [you’ll get to see] a Champions League match from the inside!'”

Rodriguez said he’d love to, but he would pay for everything. Mourinho shook his head and smiled. “When you’re with me in Europe, you don’t pay for sh*t!”

And, that dear friends, is pure distilled awesome juice.

To continue with Rodriguez’s tale and gawp at the tidal wave of high-end freebies and new celebrity acquaintances he picked up over the course of his time at Mourinho’s side, head over to Sports Illustrated and read on…