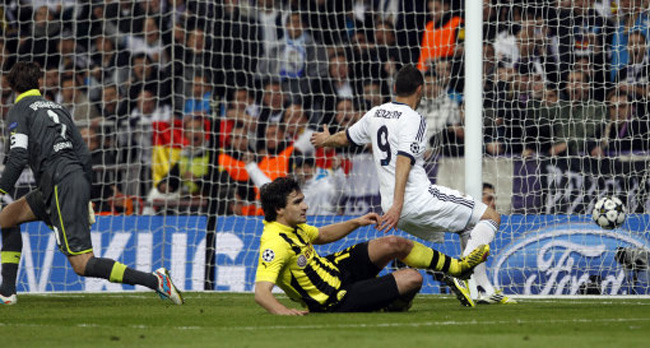 Despite a stirring comeback by Real Madrid late on at the Bernabeu, Borussia Dortmund held on to book their place in the Champions League final at Wembley.

Jose Mourinho’s men had a massive mountain to climb after their shock 4-1 defeat at the Westfalenstadion but started the game all guns blazing. However, throughout the majority of the contest they failed to make the most of their chances, with Mezut Ozil, Gonzalo Higuain and even Cristiano Ronaldo all fluffing their lines.

The Black-Yellows had their chances too, with four-goal hero of the first-leg, Robert Lewandowski, failing to convert a number of good chances.

Then, with eight minutes to go, Madrid’s pressure final paid off, with Karim Benzema firing home before Sergio Ramos gave the home fans further hope of a magnificent comeback. But ultimately, Jurgen Klopp’s popular side held on to reach the club’s second Champions League final.

As for Mourinho, his next game in the competition may be as Chelsea manager next season. That’s if the Blues qualify, of course.