“Your innocence has been wretched away. The foundation of your entire belief system has crumbled; you’ve stared into the abyss and have seen that the world is cruel and the heroes always die at the end.”

“You’re here because you’ve been a victim on the football pitch, and now all seems bleak. You’ve been nutmegged.”

The cold light of day can be a cruel mistress. As you’re no doubt aware, David Luiz has been mercilessly harangued from pillar to post today after Luis Suarez gave him the ol’ lollipop treatment not once but twice during Barcelona’s Champions League destruction of PSG last night.

In fact, things were looking so bleak for the disgraced PSG defender that Suarez actually publicly apologised for his double-bubble bout of footballing impunity, insisting that he “had to nutmeg Luiz twice” as it was his only option – the Uruguayan once again pleading diminished responsibility.

Luiz himself even admitted: “It wasn’t a great evening for me”. Wow. That took an industrial silo full of gumption.

As is usually the case, social media was particularly unkind, with the braying masses having their fun at Luiz’s expense as the man himself plumbed the very depths of his lonesome psyche, questioning all he had previously believed to be true. His fragile sense of self circling the drain all the while.

The remorseless goading was such, in fact, that Luiz’s dear old mum, Regina Celia, felt compelled to speak out in defence of her humiliated son this afternoon. 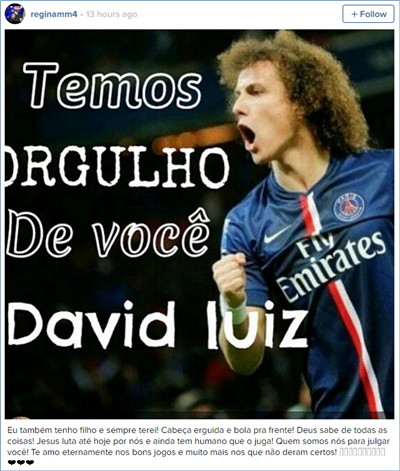 “I have a son and I always will! His head held high, with a ball at his feet.”

“God knows everything! Jesus is fighting for us until this day and yet we still have people who judge!

“Who are we to judge you! I will always love you after the good games, and even more after those that don’t go well!”

What a saint. This woman gets it.

Broken legs and shredded cruciate ligaments be damned; there is no greater pain to be experienced on a football pitch than the emotional obliteration caused by a ball disappearing twixt thine legs.

(*If you’ve been affected by any of the issues raised in this article, we suggest you read Zito’s brilliant article, “So You’ve Been Nutmegged…”, in full here)