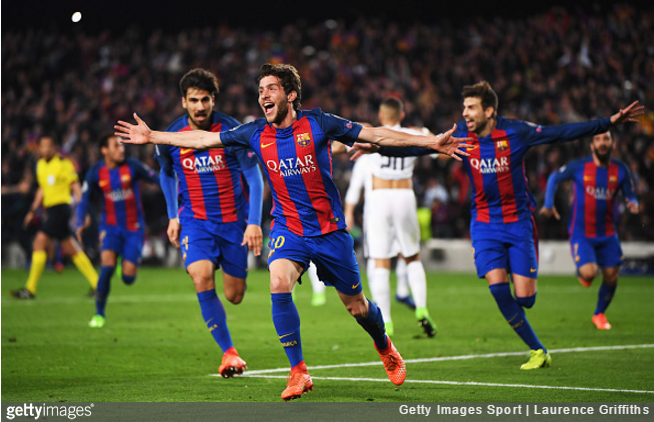 Sergi Roberto scored with what was effectively proved to be the final kick of the game to secure a truly ludicrous for Barcelona in their last-16 second leg against PSG.

Chasing down a 4-0 swing from the first leg in Paris, Barca set about gobbling up the deficit from the off – Luis Suarez pulling back the first goal of the night with just three minutes on the clock.

An own-goal from Layvin Kurzawa and a Lionel Messi penalty saw the Catalans sail into a 3-0 lead and needing just one more goal to restore parity overall.

However, the momentum dramatically swung back in PSG’s favour when Edinson Cavani rifled home a bouncing ball to put the Ligue 1 side 5-3 up and, crucially, give them the added leverage of an away goal.

That’s the way it remained until the 88th minute, when Neymar sparked Barca’s second wind by curling a first class freekick into the top corner from 25 yards.

The Brazilian, who hadn’t had much joy up until that point, then grabbed another goal from the penalty spot in the 91st minute to draw Barca level at 5-5 and set up the exhilarating storybook finale.

Sure enough, with Barca throwing absolutely everything at PSG, Neymar clipped a ball over the defence and Roberto stretched every sinew, every fibre of his mortal being to turn past Kevin Trapp in the 95th minute…

And so it finished: 6-1 on the night, 6-5 on aggregate and Barca into the quarter finals against all the odds.

Bloody insanity, but where does it rank in the grand pantheon of Champions League comebacks?

Better than Sheringham and Solskjaer on that balmy evening in Barcelona in ’99, Deportivo screwing AC Milan over in 2004 or even Liverpool doing likewise in Istanbul two years after that?