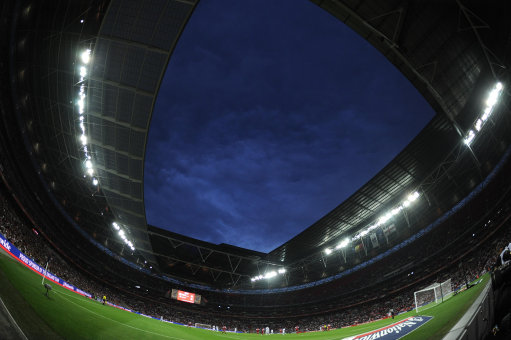 Fan groups are reacting angrily today after UEFA announced just before the close of play last night that the ‘cheap seats’ on general sale for this year’s Champions League final at Wembley will be priced at an astronomical £176 (that’s £150 plus a £26 admin charge), a price hike of nearly 15% up from last year’s prices.

The cheapest tickets for supporters of the two clubs that reach the final will be a relatively modest £80, though UEFA are yet to confirm how many of the 50,000 seats that will be shared between fans of the two finalists will fall into that bracket.

Understandably, Malcolm Clarke, the chairman of the Football Supporters’ Federation, is not a happy bunny:

“These prices are absolutely outrageous and take ticket pricing to an absurdly stratospheric new level.

“In a difficult economic climate, not only in this country but across Europe where supporters may be coming from, this represents disgraceful exploitation of fans.

“The £26 administration fee represents the cherry on a particularly disgusting cake. There is absolutely no way of justifying such a high fee and UEFA should be ashamed of themselves.”

However, speaking at the ticket launch ceremony, UEFA’s director of competitions Giorgio Marchetti was insistent that the rising prices are merely in line with other comparable sporting spectacles:

“The prices are based on the type of event and when you compare it to other events we don’t think that the Champions League final is overpriced.

“We have to benchmark this event against other comparable events like for example the final of the Euros and the World Cup.

“We do not want to squeeze every single penny out of the market.”

You know what? I think I might just watch it on telly again this year.