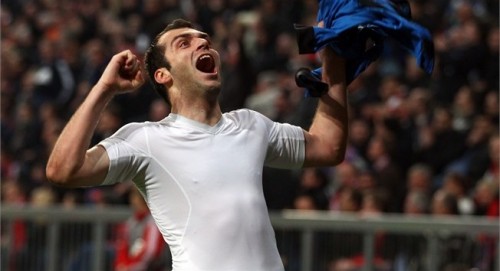 Champions League holders Inter Milan produced an incredible second-half fightback to come from behind at the Allianz Arena, overturning their 1-0 first-leg deficit and eventually sending Bayern Munich sprawling out of the competition.

Goran Pandev’s superbly taken 88th-minute winner saw Inter emerge victorious, though the Italians looked utterly beleaguered as they went in at the break – with bouts of disastrous defending from Lucio and ‘keeper Julio Cesar leaving them 2-1 down on the night and 3-1 down on aggregate.

Bayern continued to dominate after the interval until Wesley Sneijder guided Phillipe Coutinho’s knock-down past Thomas Kraft after 62 minutes, thus reversing the entire dynamic of the contest – with the German’s left to hang on as Inter suddenly realised that all was not lost.

As the tie entered it’s final throes, Samuel Eto’o found space on the edge of the Bayern box and laid Pandev on for the out-of-sorts Macedonian to curl a fine shot into the far corner, thus landing the Nerazzurri with a quarter-final berth that looked utterly out of reach with three quarters of the tie played.

“To explain this contest would be truly difficult, the difference was our heart.

“Skill was the key to our recovery. After their equaliser we have tried to play at a delicate psychological moment and we conceded another goal.

“We managed to recover without losing our heads. We stayed calm and tranquil.

“Pandev? He scored a goal that Maradona would have been proud of at a time that has not been so good for him.

“I can’t take any credit for this. The team spirit was always here otherwise they would not have been able to achieve this result.

“This is a historical result because we have done it in the Champions League. We risked so much because we were unbalanced. We did well to be in the match, even at difficult times, although there was much luck of course.”

As ever, enjoy the video while you can before the Youtube Police cotton on.