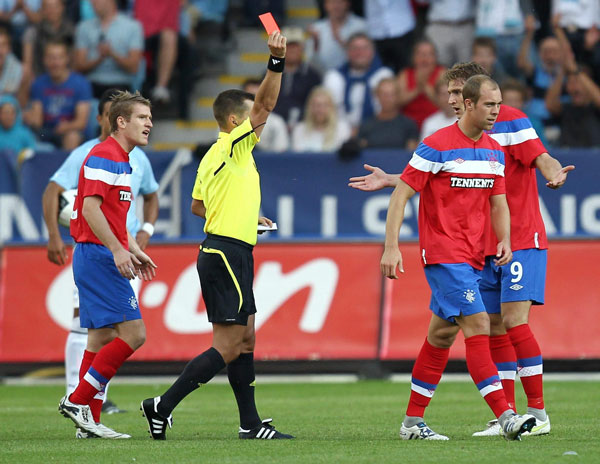 Rangers dive-bombed out of the Champions League at the first hurdle last night, drawing 1-1 against Malmo at the Swedbank Arena, thus failing to reverse the 1-0 home defeat inflicted upon them by the Swedes at Ibrox last week.

The ill-tempered affair saw Gers end the game with nine men after having both Steven Whittaker and Madjid Bougherra pick up straight reds for ‘hoying the ball around willy-nilly’ and ‘planting elbows in craniums’ respectively. Indeed, his dismissal in Sweden may prove to be Bougherra’s final act as a Rangers player with a £1.7 million move to Qatar side Lekhwiya now thought to be verging on completion. Bye!

It’s perhaps also worth pointing out that Malmo also did their bit in terms of  contributing to the rampant ill discipline, with Ferreira Ricardinho receiving his marching orders for a second bookable offence 20 minutes from time.

Despite the ‘crass stupidity’ on display (the Scottish Daily Record’s words, not mine), thanks to Nikola Jelavic’s 23rd-minute opener, Rangers actually came within 10 minutes of taking the tie to extra-time, until Jiloan Hamad restored Malmo’s aggregate lead by cracking one home from the edge of the area.

Rangers will now drop down into Europa League fourth round play-offs.