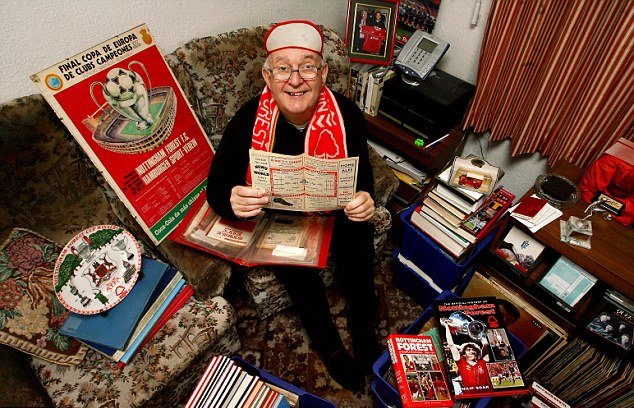 The man who may well be Britain’s most dedicated football fan has missed his first game in 40 years after being forced to listen to his beloved Nottingham Forest’s game against Burnley on Monday on the wireless having been laid up following a foot infection.

Stuart Astill, 67-years-old and from Pies’ hometown of Sandiacre in Nottinghamshire (represent!), last missed a Forest match 1,786 games ago in 1973 when he had to usher at a friend’s wedding, and has seen The Reds play, both home and away, some 2,534 times in total since first going to The City Ground as a boy back in 1956.

Astill had an operation to remove part of his toe last week and defied doctor’s orders to go and watch Forest play Brighton on Saturday with a big cast on his foot, though he was told in no uncertain terms that an away trip to Burnley the following Monday would not be beneficial if he had designs on recovering from his surgery, so was forced to stay at home and listen to the game on the radio.

Before the game, Stuart told the Nottingham Evening Post:

“This is my first missed game for 40 years. The last time was in 1973 – it was at home to Preston and I was an usher at a wedding.

“I’ll miss the atmosphere. I knew my run would end at some point but I didn’t expect it to be now. It’s going to be really unusual listening to the game on the radio after how many games I have been to.”

By his own admission, Stuart has spent thousands of pounds and traveled hundreds of thousands of miles across Europe (not so much of late) to watch Forest play week in, week out since 1956 – now that’s some serious dedication to a rather questionable cause!

Anyway, get well soon old chap. We’ll be round for a cup of tea in ten minutes.

(Image: This Is Nottingham)