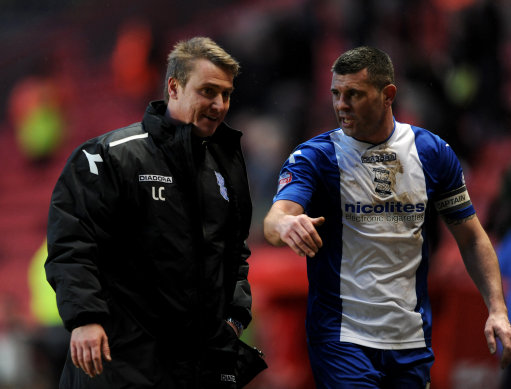 Birmingham City manager Lee Clark has accused the referee who oversaw his side’s dramatic 3-3 draw against Burnley at St. Andrews last night of teasing one of his players about the scoreline after the Blues went 2-1 down shortly after the hour mark.

If Clark is to be believed, referee James Linington mocked Birmingham captain Paul Robinson after booking him for dissent in the aftermath of Burnley’s second goal of the evening, which came about when the Clarets were awarded a debatable free-kick just outside the Blues’ area after Robinson had tangled with striker Danny Ings.

Clark, who was running a little high on emotion throughout the tie, told reporters after the game:

“There was an incident involving Danny Ings and Paul Robinson. I thought it was a foul by Ings.

“[Burnley] scored from the resultant free-kick. Paul remonstrated with the referee, who gave Paul a yellow card, but he mocked him about the scoreline at the time.

This is totally unacceptable. When my captain is fighting for the club and the supporters are backing my team and when I am working as hard as I can to get the results to remain in the league, getting mocked by an official is something I am not going to accept.

“I am not questioning his performance, but he knows what he said and it is not acceptable in any walk of life.

“This was the only downside, and I have to flag it up. It is that it is not acceptable for an official to mock any player at any stage.”

What kind of heartless beast would tease poor defenceless Paul Robinson – who, we might add, is the closest thing football has to Mother Teresa. It’d be like poking an ‘ickle baby bunny wabbit until it cried.

In all seriousness, can you just imagine the relentless slanging that officials recieve from “real football men” like Clark and Robinson all game, every game? Frankly, you couldn’t pay us enough to do their jobs most weeks.

The hypocrisy is super strength in this one.