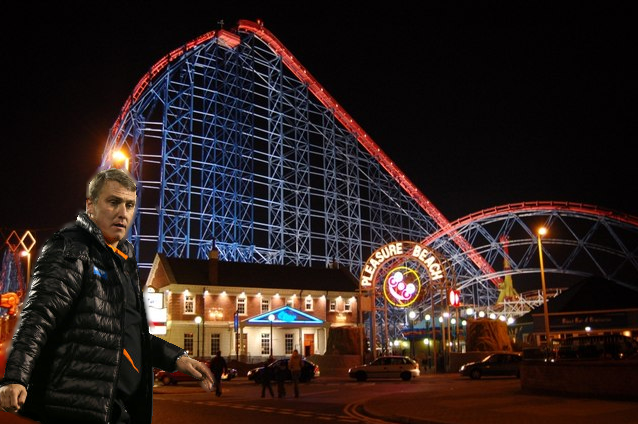 Despite being deathly afraid of rollercoasters, Blackpool manager Lee Clark has vowed to ride “The Big One” at Blackpool Pleasure Beach if he manages to keep the Seasiders in the Championship come the end of the season.

Having won just one game so far this season after beginning the campaign with about five senior players on their books, Blackpool are currently rock bottom of the Championship, ten points adrift of safety and on the smelly end of a six-game winless streak – though Clarke is hoping his little wager will inspire him players to pull their collective fingers out.

“I’ll have to have a few glasses of beer before I get on it.

“Whenever we’ve gone to the States with my kids I’ve had to be the one to do it, and I absolutely dread it.

“I drove past the one at the Pleasure Beach and I was like ‘look at the size of that, I would be terrified’, and we made this deal.

“I don’t know why I agreed to it. We’re just desperate to keep the club up.”

Just to put the frighteners up Clark a wee bit more, “The Big One” was both the tallest and the steepest megacoaster in the world when it opened in 1994, what with it climbing to a height of 213 feet (65 metres) and maxing out at a top speed of 74 mph and all.

In fact, it’s so tall that shortly before the ride opened, Blackpool Airport made the Pleasure Beach fix warning beacons to the top of the two humps to prevent aircraft crashing into it at night!