On an exciting day in the Championship, Watford secured their place in next season’s Premier League thanks to 2-0 way away at Brighton.

The goals came courtesy of  Troy Deeney and Matej Vydra, firing the Hornets to a win while fellow promotion-chasers Middlesbrough lost 4-3 at Fulham and Norwich could only draw 1-1 away at Rotherham. 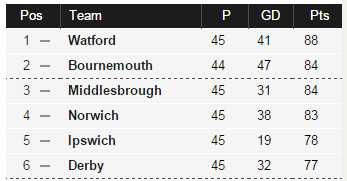 After what has been a rollercoaster ride of a season, Slavisa Jokanovic, the club’s fourth manager this season, will now see his side line up in the top-tier for the first time since the 2006/07 season.