Cardiff City owner Vincent Tan is no stranger to controversy and putting his foot in his rather big mouth. This week, the Malaysian billionaire has given the Bluebirds’ players a rather ridiculous team-talk as they look to climb into the play-off places from their current ninth placing in the Championship. 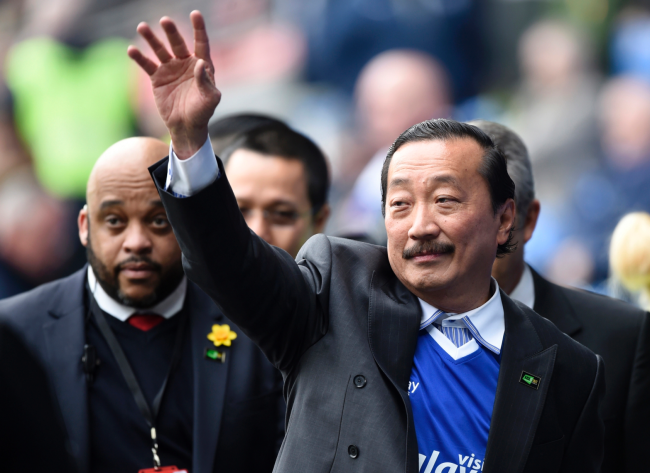 Imparting his wisdom on the game, Tan, who took over the club in 2010, implored his players to shoot more rather than pass it about with no final product. He said:

I told them David Marshall is keeping clean sheets, yet look at the stats. There are more draws than wins. David is doing his bit of the bargain, I told them, so clearly you guys are not scoring enough.

In every match I want to see 30 or 40 attempts on goal, at least. Just shoot from 25, 30 yards, I told them. The law of averages says the more you shoot, the more you’ll score. If you shoot 30 times you’ll get three goals, 40 times will be four goals, 50 times and you’ll get five goals.

Continuing his pep talk, Tan then veered off on a rather silly tangent, equating scoring to having a ‘beautiful wife’. He explained:

Have you seen ugly men walking around with a very beautiful wife? Well that’s because they’ve asked 30, 40, 50 times before getting a yes.

On the other hand, you’ll see a handsome man ask once, get a ‘no’ in response and that’s it.

So the more you try, the more success you’ll have. We need a lot more goal attempts, we’ll score more and win games.

Now while the old ‘you can’t win the Lottery if you don’t buy a ticket’ theory does has its obvious merits, the ‘beautiful wife’ bit is just the kind of outdated sexist nonsense which still, sadly hangs around football like a bad smell, despite the recent steps forward.

From objectification to the implication that ‘no’ doesn’t really mean ‘no’, Tan’s outpourings are a big load of horse manure and not ‘just banter’, and ones which do the game no good at all.