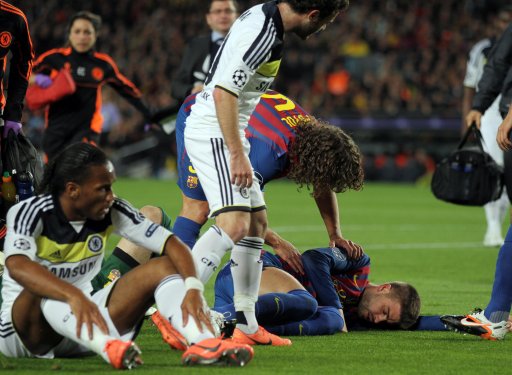 Barcelona centre-half Gerard Pique was discharged from hospital yesterday afternoon following an evening under observation after getting knocked out sparko in a collision with Victor Valdes at the Nou Camp on Tuesday night.

However, according to Catalunya Radio, Pique cannot remember playing against Chelsea at all despite making it through 18 minutes of the match before being carted off to hospital with a pretty serious case of concussion – which is either extremely worrying or extremely convenient.

We jest of course as it would appear to be the former. Pique was quite clearly seeing stars when he was sat up on the ground following the accident, heaven knows why he was allowed to play on by the medical staff afterwards.

Apparently his parents had to break the bad news to him, informing him of the score and that Barcelona had been knocked out as a result.

Pique is now set to return to Barca’s medical facilities to ‘have his situation assessed’.

Get well soon and all that.