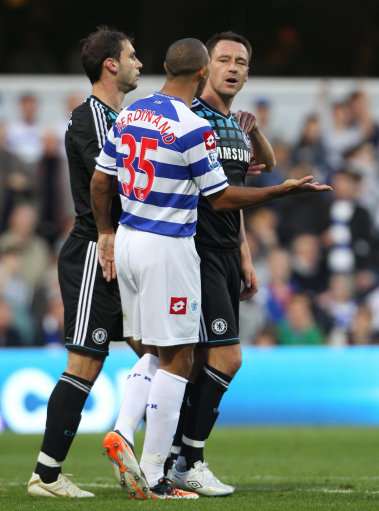 Who would have thought that the simple act of shaking someone’s hand would have become such an incendiary issue in the Premier League this season? Hot on the heels (ish) of the Patrice Evra/Luis Suarez handshaking palavar, the Premier League have now decided to cancel the usual pre-match shakedown between Chelsea and QPR in case it prejudices John Terry’s summer trial.

It’s now six months since the infamous incident at Loftus road involving the nation’s sweetheart Terry and QPR’s Anton Ferdinand, in which the Blues’ captain was accused of racial abusing the Hoops’ defender. With the case set to (finally ) make it to court in June, the Premier League have decided, after speaking to both clubs, that it would be best if the pre-match niceties were scrapped altogether. A statement from the Premier League said:

“The Premier League position on the pre-match handshake convention remains consistent. In all normal circumstances it must be observed.”

“However, after discussions with both Chelsea and Queens Park Rangers about the potential and specific legal context in relation to John Terry and Anton Ferdinand, the decision has been taken to suspend the handshake convention for Sunday’s match.”

Instead, the players will poke each other on Facebook the night before.