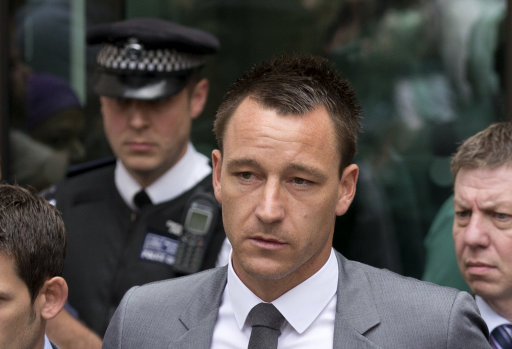 No doubt in an attempt to bury bad news on the day of the opening ceremony of the Olympics, The FA have decided to charge John Terry over his alleged racist remarks made to Anton Ferdinand last season.

The England centre-half has already come out of one court case unscathed but now he must face the footballing authorities over the incident which occurred last October at Loftus Road.

Here’s the FA statement in full…

After seeking advice from an external Independent QC, and having considered the evidence and Magistrates’ Court decision in the John Terry case, The FA has today charged the Chelsea player following an alleged incident that occurred during the Queens Park Rangers versus Chelsea fixture at Loftus Road on 23 October 2011.

It is alleged that Terry used abusive and/or insulting words and/or behaviour towards Queens Park Rangers’ Anton Ferdinand, contrary to FA rules.

It is further alleged that this included a reference to the ethnic origin and/or colour and/or race of Anton Ferdinand.

This charge is the result of The FA’s long-standing enquiries into this matter, which were placed on hold pending the outcome of the criminal trial, and relates to rules governing football only.

During this period John Terry remains available to play for England.

The FA will make no further comment during this time.

Looks like this whole saga has a bit of life left in it yet.