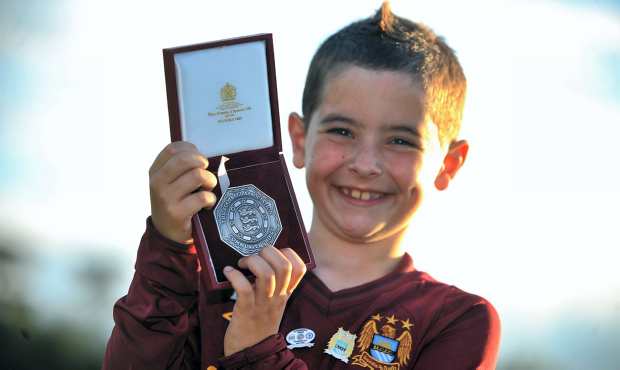 A seven-year old Manchester City fan who walked out of Villa Park with Ashley Cole’s Community Shield runner-up medal on Saturday afternoon has told any circling collectors out there that he’s willing to turn down offers of £1 million for his new prized possession.

Cole handed the medal over to young Bailey McColgan from Wythenshawe after the game, and told him: “That’s for you.”

Bailey’s dad then stepped forward to take the medal from Cole, but the Chelsea left-back insisted on giving it to the wee nipper himself.

We’ll let the Manchester Evening News take it up from here:

Delighted Bailey will now not let the medal out of his sight – even taking it to bed with him. The Newall Green Primary School pupil told the M.E.N. that Cole’s gesture had topped off his day.

He said: “I just held out my hand and he gave it to me. It made me feel really happy. I think he must be a nice person because he gave me his medal.”

And Bailey – who has already been offered £500 for the medal by a friend’s dad – has written to the England player to say ‘thank you’ and to ask for his autograph.

His mum Karla Barlow, 31, a manager at Pret a Manger in Spinningfields, said: “Apparently these medals would go for quite a lot of money but Bailey said he wouldn’t sell it for a million pounds.”

James, who also works at the same branch of Pret, praised Cole for making a ‘young lad very happy’. He said: “The look on Bailey’s face was unbelievable. A lot of stuff gets said about Ashley Cole, but this speaks volumes for him. It paints football in a different light.”

Bailey added: “I’ve shown the medal to everyone. They all said it was very heavy and they that they like the look of it. It’s made me feel super.”

Bless him, though we can’t help but think that Ma and Pa may be forced to step in should a £1 million offer actually come rolling in at some point in the near future. Believe us Bailey, if there’s one thing that’ll make you feel more ‘super’ than a medal, it’s a cool mill in your piggy bank.

Note to Kolo Toure: The difference may be incredibly subtle, but that’s how you shift a Community Shield medal without coming across like a bit of a pillock.