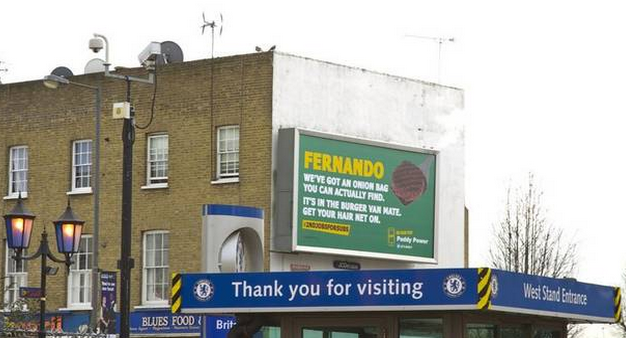 It seems a certain moribund Russian oligarch has well and truly failed to see the (fairly tenuously) funny side of a billboard whacked up outside Stamford Bridge that mocked “Fernando’s” recent inability to bother the onion bag.

The offending message reads: “Fernando, we’ve got an onion bag you can actually find. It’s in the burger van mate. Get your hair net on.”

The poster, as put up opposite The Bridge by attention-whoreish bookmakers Paddy Power (the same people that gave Nicklas Bendtner those £80,000 boxer shorts last summer) has reportedly riled Chelsea’s PR department to the point that they, according to The Daily Mail at least, are now in the process of calling in the lawyers.

Quite what intellectual property rights they’re supposedly claiming to have over the name ‘Fernando’ is another mate entirely.