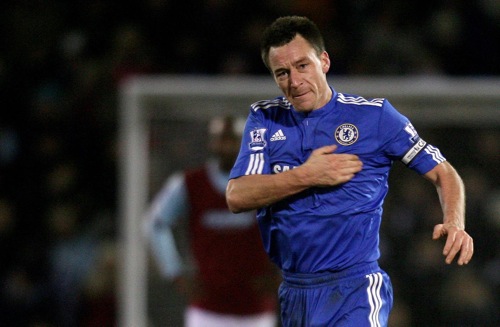 Believe me when I say that the headline opinion is genuine and not motivated by a desire to take the road less travelled of the contrarian. Well, not much.

So why do I reject the predictable ‘Sack Terry!’ calls of the witch-hunting media (led by the self-righteous likes of The Telegraph’s Henry Winter)? For several reasons:

1) Footballers are not role models. Professional sportsmen are the worst people to have as role models (apart from journalists, who in my experience booze, shag around and do more drugs than any other bunch of people). Yes, I know loads of kids do “look up” to sports stars, and that the irony of JT being voted Farther of the Year is as tragic as it is comic, but seriously, when have footballers ever shown role-model qualities? If you get your morals, ethics and values from the likes of Terry and Stevie G, you’re looking in the wrong place. Try golf instead. Oh, wait…

2) So a sportsman cheated on his partner. And this is news? Sadly, in terms of England stars, Terry is far from alone in his lack of fidelity – he’s a famous and wealthy man, after all. David Beckham has had more than one alleged lover. Bobby Moore’s first wife has told of his indiscretions. And did you forget that Wayne Rooney visited prostitutes whilst in a relationship with current wife Coleen? Ashley Cole cheated on Cheryl. I could go on. And on and on. And then on some more. And do you really think they didn’t all try to cover up their misdemeanours, as Terry did?

3) In international football, the captain’s armband means little. What, you think England’s players played their hearts out for JT before now? The hero-hungry media places far too great an emphasis on the role of England Captain; I’d guarantee that England’s players care little who their skipper is. The very concept of Steven Gerrard or Wayne Rooney being inspired to play better by John Terry is absurd. The armband matters much more at club level – at international level, forget it. If England’s stars play for anyone these days, it’s Fabio Capello.

4) Who else is there? Steven ‘punch-drunk’ Gerrard? He’s not even playing well enough to make the starting XI right now. Wayne Rooney? Why burden England’s best player with extra PR duties? Rio Ferdinand? Nope. Frank Lampard? Maybe, but then he’s best mates with Terry, so it hardly solves the perceived problem. If anything, Terry’s match-winning performance at Burnley on Saturday showed me that he has the mental strength to keep hold of the England armband and not let any outside distractions affect his performance. Because if he can play that well in the middle of a shitstorm, then surely nothing can touch him.

The bottom line: Terry is England’s best defender, he’s in brilliant form and he’s one of the few certain starters for South Africa. That’s all Fabio Capello cares about, I’m sure, and that’s why I think Terry should – and will – captain England this summer. Would I want him as a mate though? Hell no – he seems like a deeply unpleasant man. But for me, that’s a whole different argument.