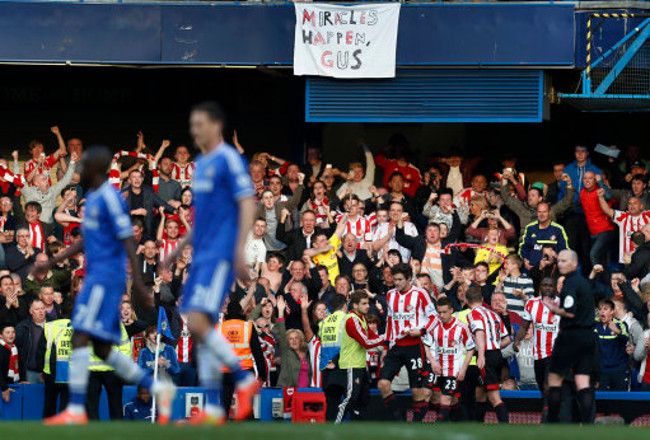 What a dramatic game this was, with Fabio Borini, a former Chelsea youth player who is currently on loan from Liverpool netting the winner for Sunderland. That decisive goal, which saw Jose Mourinho suffer his first league defeat at Stamford Bridge ever came after a rather soft penalty decision, with Jozy Altidore standing on Cesar Azpilicueta’s foot rather than the other way around. Still, with the game almost over and the score 1-1, Borini calmly slotted home to secure an historic win for Sunderland and one which may help keep the Black Cats up while at the same time buggering up Chelsea title tilt.

Samuel Eto’o had given the home side the lead early on, only for in-form Connor Wickham to fire home an equaliser after mark Schwarzer could only parry Marcos Alonso’s shot.

Midfielder Ramires was incredibly lucky not to be sent off for a foreman smash in the gob of Seb Larsson while overall the Blues struggled to click into gear.  Oh, and in bizarre scenes, Chelsea’s assistant manager Rui Faria had to be held back from confronting ref Mike Dean.  What drama!