What they said after the game:

We have suffered physically today and the pitch was not great. But overall it’s good because in pre-season we have been solid defensively. Pre-season has gone quite well. We have no big injuries at the moment apart from Jack Wilshere who we lost yesterday… We defended because maybe it was a psychological hurdle Chelsea had in my players’ heads.

It’s really nice to come to Wembley and win. We wanted to keep our good streak here going. We are delighted to win another trophy and for me personally, I’m happy I got the winner. I don’t actually think I’ve lost at Wembley. Long may it continue. Today was a big game for us and we wanted to lay down a marker for our manager and our fans. I want to contribute more goals this season, it’s a target I’ve set for myself, and of course I’m happy to have got the goal today.

We were the best team. We had more initiative, we controlled the game by having ball possession. Arsenal defended with 10 players, they put everybody in front of their own line and they had good organisation, congratulations to them. They had a couple of chances in counter attacks but we had ours in organised football. They played their game tactically and found themselves one goal in front without any reason. This season the Premier League title is very difficult but it is very difficult for everyone. The way other teams are spending they have big power in the hands while we are the same as last season. And with that we are going to try…

The best team lost and the defensive team won. The team defends well and leaves their philosophy in the dressing room and changes that attitude and philosophy… This is football, this is very good tactical organisation and in the perspective, they scored one goal and deserved to win… One team played counter- attack and one had the initiative and played well without the sharpness you need.

I don’t think that’s giving up our philosophy, it’s the fact in a game like that, we wanted to win, that’s why we behaved like that. I’m proud of that.

And then there was the handshake that wasn’t.

Says Mourinho, who made a big pantomime of snubbing Wenger:

I was doing what the status of my club and my status as a manager I think I have to do for myself and the club which is to be there for the winners, to wait for them in a point that you only miss me if you want to miss me. Every Arsenal player came in my direction which was the easiest thing to do because I was just there and if other people didn’t come in my direction that is not a problem, not a story and not the end of the world and I gave no more problem on that. I did my job, the job that my club deserves me to do and the status as a manager when I lose a charity shield or any trophy.

I shook a few hands after the game but there’s nothing special there. 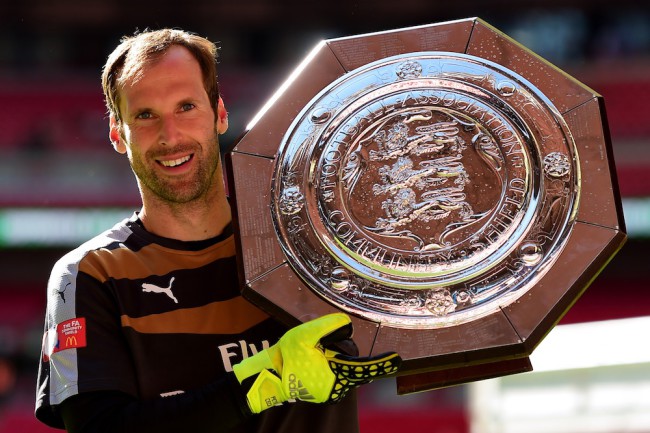 Petr Cech of Arsenal poses for photographs with the trophy 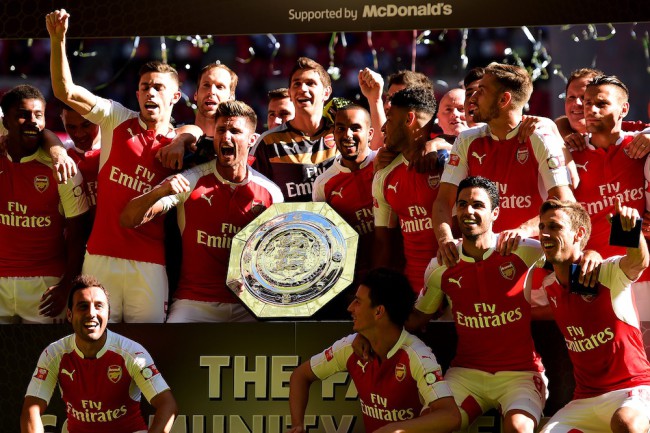 Arsenal players celebrate with the trophy