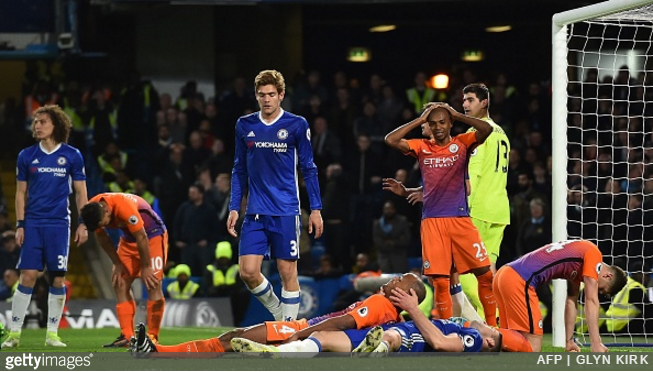 John Stones had a gilt-edged chance to throw the Premier League title race wide open in injury time at Stamford Bridge, only for the Man City centre-half to somehow fire over from all of five yards with the score at 2-1 to Chelsea.

The chance came right at the death, with City pushing for an equaliser against Antonio Conte’s title favourites.

Getting on the end of a corner, Stones should have converted the easy chance, only to ricochet the ball over the bar and further bolster the Blues’ championship tilt in the process.

Although in fairness, the ball did seem to take a slight touch off Vincent Kompany on the way through the box, which probably put his teammate off…

#CFC‘s John Stones misses a huge chance in the dying seconds of the game against #MCFC.#CHEMCI pic.twitter.com/TrknyyRXtl

Could that be the ‘Sliding Doors’ moment? Particularly with second-placed Tottenham staging a dramatic late comeback win at Swansea.

Prior to the dramatic finale at the Bridge, Eden Hazard had been the star of the show for the hosts – netting after just 10 minutes, via a finely struck, albeit deflected effort…

However, Sergio Aguero levelled the scores on 26 minutes for the Citizens after Thibaut Courtois had initially given the ball away to David Silva in a dangerous position…

The stalemate would last only nine minutes before Hazard netted his second of the night, firing home the rebound after his penalty had been saved by Willy Caballero.

Had Stones converted his chance to salvage a draw, Spurs would now only be five points behind Antonio Conte’s men.

Instead, Chelsea stay a healthy seven points clear with eight games to play.

As for City, they stay fourth.