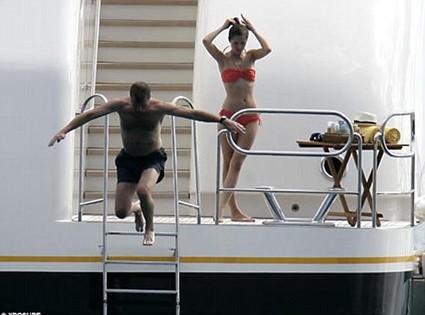 Rumours abound that Roman Abramovich (pictured above, jumping off one of his yachts) lost a $500,000 yacht in a game of poker. Abramovich’s people have denied the rumour: “The story is absolutely, completely, entirely false,” said John Mann, a spokesman for Chelsea’s owner.
Russian daily Moskovsky Komsomelets reported that the Russian lost one of his many yachts while playing poker in Barcelona last week. Several other Russian newspapers published the story, citing Italian newspaper La Repubblica as a source.