The News of the Screws’ big scoop this weekend: Ashley Cole shot a work placement student with an air rifle. It was an accident, mind. 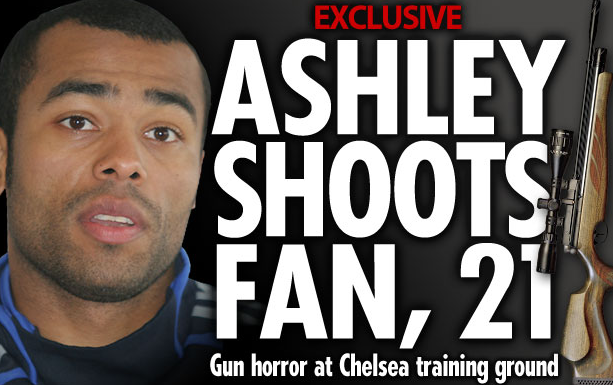 The paper claims that last Sunday, Cole shot 21-year-old Tom Cowan from just 5ft away as he “larked about” (larks with guns; brilliant) with a .22 calibre air rifle at CFC’s training ground.

Cowan was given medical treatment immediately after the “larks”. He did not die. Phew. Cole might have been fined a month’s wages for manslaughter.

A source (John Terry?) told the NotW: ‘It’s truly inconceivable that a Premier League footballer could bring a gun to the training ground.

“But Ashley pulled the rifle from a box and started larking about with it in the changing room.

“Cole didn’t know the gun was loaded but it’s a disgrace. His behaviour beggars belief.”

Well, maybe, but who is surprised anymore by the childish behaviour of high-earning English footballers? What is more belief-beggaring is that Chelsea was only slapped on the wrists by his employer. And that he had no idea that the gun was loaded. Astounding.

In most other lines of work, if you shoot the work experience guy with a gun… well, it’s glaringly obvious what would happen to you. Funny old game, football.