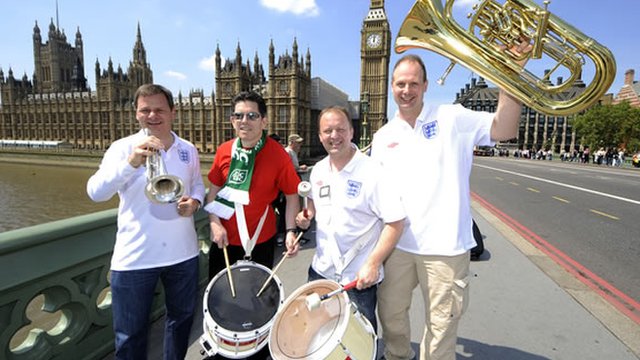 After having a bit of a benny about their instruments being confiscated on security grounds at the Donbass Arena ahead of England Euro 2012 opener against France, the England Supporters Band have now received clearance to play in the crowd for England’s second group game against Sweden on Friday.

The band contacted the FA to complain about their treatment in Donetsk and, after a pow-wow with UEFA, it has been confirmed that we will all be treated to a never-ending ‘Great Escape’ brass riff until our brains dissolve into mushy paste and we all fall into a deep, vegetative state of catatonia.

“It’s the best news possible. We were gutted to have driven 2,800 miles only to have our instruments confiscated.

“Our sponsors (Pukka Pies) gave us the good news this morning and we are delighted to have the chance to create the best possible atmosphere for England fans in Kiev.

“It’s going to be a very unusual situation with Swedish fans outnumbering England supporters by four to one. So we will be doing our best to help our fans generate more than the Swedes.”

Yeah! Great news! Now excuse us while we try to find a red-hot soldering iron to ram down our ears in time for tomorrow afternoon.