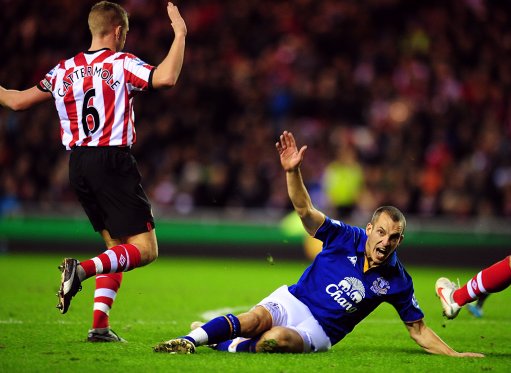 On Boxing Day, Martin O’Neill’s Sunderland were a goal ahead and looking to pick up all three points against Everton when, early in the second-half, the Toffees’ diminutive schemer Leon Osman ran into the Black Cats box with the intention of shooting on goal. The midfielder then completely missed his kick, with his foot hitting the turf instead of the ball. As he lost his balance and fell, Osman then raised his arms in protest at an apparent trip by a Sunderland player before punching the ground in anger at the phantom foul. This blatant act of cheating won Everton a penalty which Leighton Baines duly converted, to give his side a share of the points.

However, on Match of the Day that evening, none of the pundits dared to question Osman’s motives, instead pointing the finger at referee Howard Webb for awarding the penalty. This pre-meditated glossing-over of an obvious and outrageous act of cheating was repeated in most of the media after the game and one again highlighted the English media’s refusal to treat English and foreign players equally. Imagine if it had been Balotelli, Nani, Arteta or Adebayor who had won their side a spot-kick in a similar fashion to Osman? The pundits and journos would have had no hesitiation in branding the player a cheat or at least properly highlighting the player’s dishonest actions. Indeed, players such as Morten Gamst Pedersen have been mocked on MOTD for blatant diving, yet Osman is an Englishman and, as we know, Enlgishmen don’t cheat. Except Rooney, Gerrard and myriad others, of course.

There has been much talk about racism in football in recent weeks, but the fact that a casual, subtle xenophobia still pervades the media who cover the game, is also an issue which needs to be addressed.

The incident starts at 1 min 19 secs on the video…