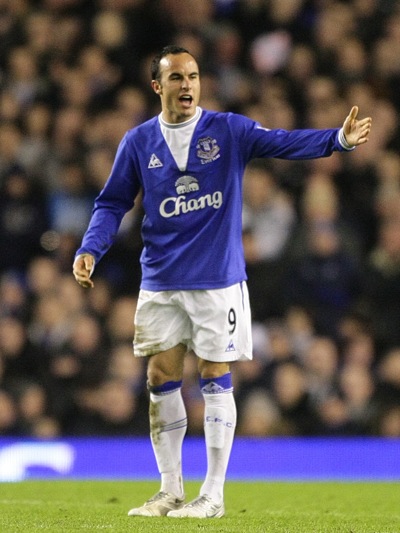 Landon Donovan, who has impressed in his two games so far for Everton, has in return been more than impressed by how vocal footie fans are in England. After his new team’s 2-0 win against Man City, the MLS star said:

“The atmosphere completely surpassed what I thought. I guessed if we scored a few goals or were winning they’d be loud, but it was from minute one. They really push you on. At points you get a bit tired but then you hear them and it helps them keep going.”

This could be where I insert a snide joke about how passive American sports fans are used to being told when to cheer by women with fake breasts and plastic smiles, but I won’t, because many MLS fans actually do support their team with huge – and genuine – enthusiasm. But when Goodison is rocking, as it was on Saturday, it really rocks, all the way up to 11. 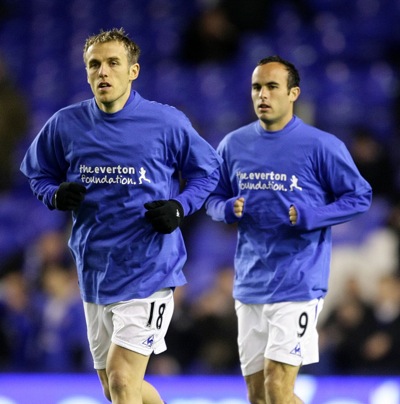 Landon also had very good things to say about his time on Merseyside so far, not to mention a little dig at previous European club, Bayern Munich:

“I’ve been made to feel so welcome and when you’re welcome like that you don’t want to let anyone down. It’s a sharp contrast to how I felt last year when I was at Munich.

“It’s a little more individual and selfish there. Here they make you feel part of a family and you keep going because you don’t want to let anyone down.

“But who knows what will happen in the future. Football’s funny and you never know what could happen.

“If I look back after 10 weeks and say I really want to stay then maybe I can make that happen. If I say OK it was good, but I’m ready to go then I can go, but for now I’m taking it week by week.”

Seems like Landycakes is enjoying not being the centre of attention for once. Always being the go-to-guy – as he has been for his club and country – takes its toll.

There is now talk that Donovan’s stay in England could last longer than 10 weeks, if not a permanent deal then a loan extension. LA Galaxy might not be so keen, but for MLS overall, any exposure its best player receives can only be good news for the health of the game in the States.