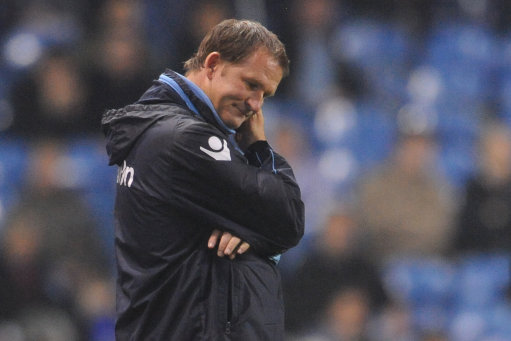 After three years in charge, a promotion from League One and decent finish in the Championship last year, Leeds United have seen fit in their infinite wisdom to sack manager Simon Grayson with the club ‘languishing’ in tenth position after losing 4-1 at home to Birmingham last night.

The following statement from the club’s chief exec Shaun Harvey appeared on the Leeds official site this afternoon:

“We have 18 games to go this season and are still within touching distance of the play-offs.

“We felt, with the transfer window closed, we needed to make the change at this time in the belief that a new managerial team will be able to get more out of the existing squad of players and make the difference.”

So that’s their captain (died-in-the-wool Leeds fan and hometown hero Jonny Howson) flogged and their supposedly highly-sought-after young manager canned within the space of a fortnight? Onwards and upwards, eh? Something tells me that Ken Bates is going to have a mass mutiny to deal with this time.

Grayson has paid at the hands of his own success. He arrested the club’s dismal decline, pulled them out of the doldrums in an incredibly short time frame and has been punished for failing (in massively distorted terms) to suitably progress this term. He shouldn’t be overly worried, most clubs in the Football League will be willing to employ him as and when the opportunity arises.

As for the next incumbent at Elland Road, anyone else got a gut feeling way down in their water that we’re going to wake up to ‘Neil Warnock handed Leeds job’ headlines at some point between now and the end of the week?