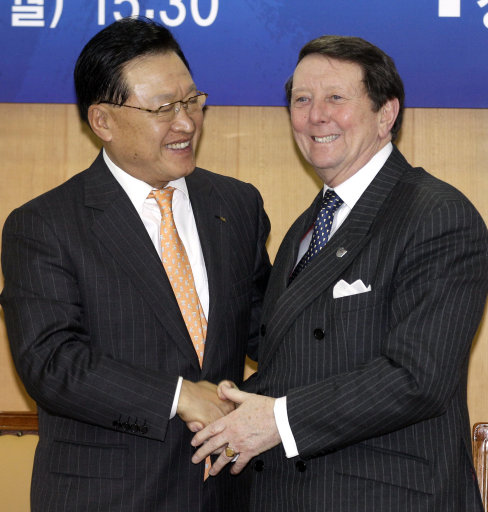 Apparently diplomacy isn’t one of Premier League head honcho Dave Richards’ best traits. The former Sheffield Wednesday chairman and FA board member has caused a bit of an international incident at a football security conference in Qatar after claiming that both FIFA and UEFA ‘stole’ the game of football from the English. He said:

“England gave the world football. It gave the best legacy anyone could give. We gave them the game. For 50 years, we owned the game. We were the governance of the game. We wrote the rules, designed the pitches and everything else.”

“Then, 50 years later, some guy came along and said you’re liars and they actually stole it. It was called FIFA. Fifty years later, another gang came along called UEFA and stole a bit more.”

Midway through his bizarre rant, Richards was politely reminded by FIFA Vice President Prince Ali Bin Hussein of Jordan that there was still a debate over whether the game originated in England or China. However, Richards was having none of it, no doubt as the sound of Rule Britannia played loudly inside his head. On he droned:

“It started in Sheffield 150 years ago. We started the game and wrote the rules and took it the world. The Chinese may say they own it but the British own it and we gave it to the rest of the world.”

So there. Stick that in your ethnic pipe and smoke it, Johnny Foreigner!

Actually, I expect Richards will soon be forced to make a mealy-mouthed apology before eventually declaring himself a UKIP candidate at the next election.

UPDATE: The latest word emanating from journos present at the conference in Dohar is that Richards fell in a swimming pool upon leaving the stage after his turgid rant.