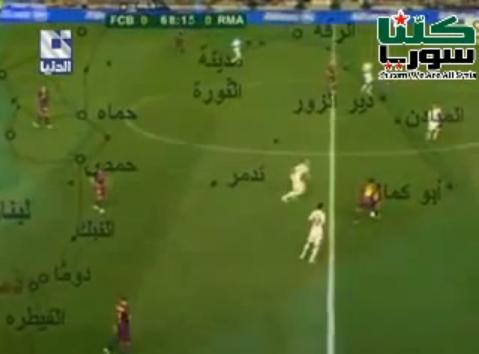 It may come as quite a shock for you to learn that I am not, nor have I ever been, a pre-eminent commentator on the disputes and conflicts that have engulfed the Middle East over the years and, with that revelation in mind, I’m going to steer clear of the politics involved here and instead focus on the utter, undiluted lunacy.

A state-owned Syrian television channel are claiming, not for the first time, that Barcelona are assisting in the smuggling of weapons to Syrian rebels who are fighting against President Bashar Assad’s security forces by encoding smuggling routes within their formations during games.

Yep. Paranoia strikes deep, into your life it will creep.

In a segment aired last December, Al Dunya TV showed a clip from an El Clasico game between Barca and Real Madrid to illustrate their point…

The narrator claimed that Barca’s formation was clearly depicting arms smuggling routes to Syrian rebels with the players representing the smugglers and the ball’s position representing the current location of the weapons. Apparently, according to the narrator, when Lionel Messi passes the ball, it indicates that the weapons have successfully reached the rebels in Dir al-Zur.

Which, you don’t need me to tell you, is absolute rot – though, if Pies is mysteriously taken offline as a result of this post, we’d just like to take the opportunity here and now to pledge undying allegiance to our new noble Syrian overlords.