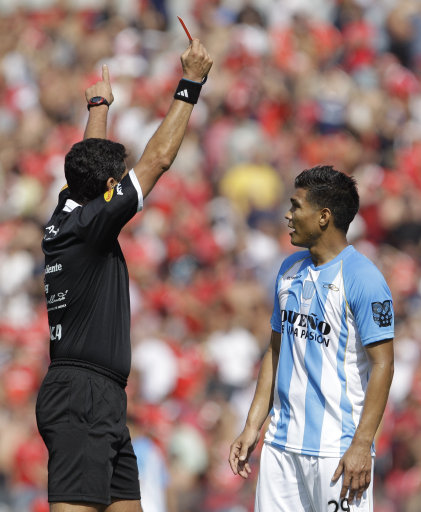 The president of Argentinian side Racing Club has vowed that unhinged Colombian striker Teofilo Gutierrez will never play for the club again after an incident that began with a senseless red card and culminated in him pulling a compressed air gun on his teammates in the dressing room.

Since arriving at Racing Club, Teo’s relatively brief tenure in Argentina has been littered with disciplinary problems; four red cards in 41 appearances, taunting Boca Juniors fans after being sent-off against them for squaring up to the referee, general diva-ism, refusing to travel to an away game and even having to be escorted from the pitch by riot police on one occasion.

In short, he’s a one is our Teo – though his piece de resistance came this last weekend during and after Racing’s game away (literally down the road) against bitter local rivals Independiente.

With Racing already a man down, Gutierrez went and got himself sent off for lip-shitting an opponent right in front of the referee – leaving his side with just nine men for the last half-an-hour of the game. Racing lost 4-1.

Several of his frayed, knackered and thoroughly pissed-off teammates then confronted Gutierrez in the dressing room after the final whistle, with a full-on fist-fight breaking out between him and goalkeeper Sebastian Saja that saw several intended ‘peacekeepers’ getting punched across the face in the melee.

According to the Argentinian press, it was at this point that Teo then turned to his holdall on the bench, pulled a paintball gun out from under his towel and took aim at his teammates.

No shots were fired, but Teo was immediately ushered out of the dressing rooms and forced to leave the Independiente stadium in a hastily arranged taxi rather than the team bus.

Racing president Gastón Cogorno then told a media conference that Gutierrez had ‘picked up his last red card’ for the club, and we don’t think he meant it in the ‘Teo must change his ways’ sense either – indeed, Corgono went on to add:

“We will seek a mutual way out but (Gutierrez) won’t play for Racing again. People are tired of Teo’s attitude.”

Whether Teo is the type of targetman that other clubs will be looking to sign is another matter.