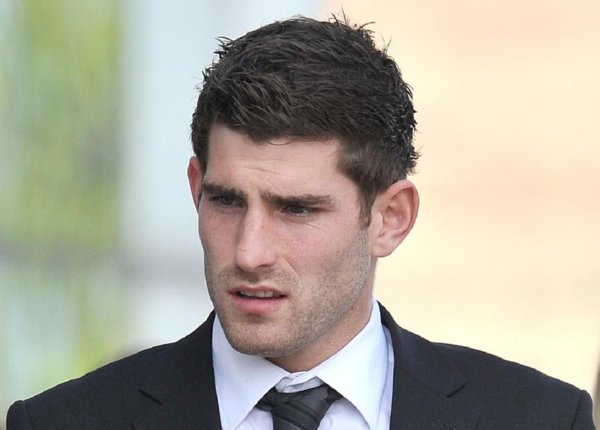 Sheffield United’s top scorer and League One’s Player of the Month in March, Welsh striker Ched Evans, has been sentenced to five years in jail this afternoon after being found guilty of rape at Caernarfon Crown Court in Wales.

23-year old Evans was on trial along with Port Vale defender Clayton McDonald, who were both accused of raping a 19-year old girl at the Premier Inn near Rhyl, Denbighshire. McDonald was acquitted.

Both men admitted having sex with the woman on 30th May of last year after a night out drinking in Rhyl, but claimed it was consensual. The girl (now aged 20) claims that she woke up ‘confused and dazed’ in the hotel the following morning, not able to remember how she got there and fearing that her drinks had been spiked the previous night.

“The court heard that McDonald met the woman and took her back to the hotel room, sending a text to Evans stating he had ‘got a bird’.

“During Evans’ evidence, he told the jury he had gone to the hotel, let himself into McDonald’s room and watched his friend and the woman having sex.

“It was claimed McDonald asked if his friend could ‘get involved’, to which the woman said yes.

“The prosecution claimed that while the attack happened, Jack Higgins, an ‘associate’ of the footballers, and Ryan Roberts, Mr Evans’ brother, watched through a window.

“The court heard the defendants had known each other since they were 10 years old and shared digs when they played for Manchester City’s youth academy.”

Immediate reaction: Why are footballer’s so obviously keen to watch each other fornicate?

Anyway, without knowing the full *ahem* ins and outs of the case it’s hard to pass any kind of judgement on the actions, allegations and testaments of either party involved – though the bottom line is that two young lives have been disrupted immeasurably.

On the one hand, a young lady has apparently been subjected to the most harrowing ordeal imaginable – which is, of course, unforgivably abhorrent on Evans’ part if true. On the other, I’ve heard stories about shag-happy footballers being targeted by vicious honeytraps that would make your head spin.

I’m not saying that’s necessarily the case in this instance, far from it – who be your’s truly to question the ruling of the Crown Court? – but it’s becoming increasingly hard to bypass the lingering doubt when rape charges continue to occur so disproportionately frequently in football.

Please forgive my cynicism. I’m fully aware it’s not appropriate and that I shouldn’t have these doubts. Lord knows women face a hard enough struggle as it is in attempting to bring their rapists to justice.

This is going to sound oblique, vile and perverse considering the crime he’s just been committed of – but, on behalf of Ched Evans, I just hope beyond hope that the aforementioned justice in question has actually been carried out here.

And before anyone goes accusing me of empathising with a rapist, have another read.