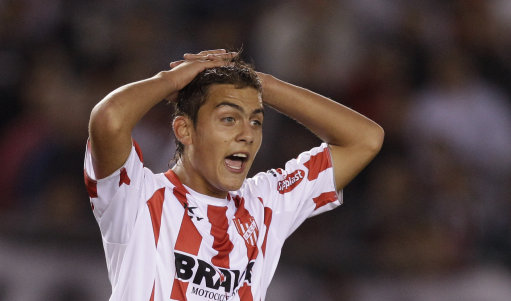 After spending the majority of the Primera Nacional B season firmly rooted in the top two of Argentina’s second division, Instituto dropped out of the automatic promotion places and into third after losing 3-2 to fifth-place Boca Unidos on Monday night – a result which saw both River Plate and Rosario Central move above them in the standings.

This didn’t go down too well with a splinter cell of the club’s hardcore support called Los Ranchos, who intercepted the Instituto team bus at the airport on their way back from the Boca Unidos games, hammered on the windows, attempted to board the vehicle and then proceeded to threaten the players – including 18-year old prodigy and supposed AC and Inter Milan target Paulo Dybala (pictured) – vowing to kill every member of the squad if they failed to win promotion come the end of the season.

La Voz are reporting that the ultras told the Instituto players that there ‘was a bullet for all of them’ and ‘we will kill you all if you don’t give us promotion’.

As pep talks go, it’s certainly not the most agreeable we’ve ever heard. Thankfully, the police are now involved.