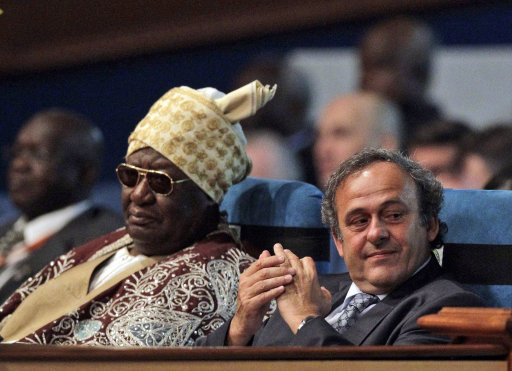 UEFA President Michel Platini was warned that any player who chooses to walk off the pitch in protest over racist abuse at Euro 2012 will be booked for their insolence – specifically singling out Mario Balotelli, who has vowed to walk and/or kill any troglodyte fans that see fit to fling their filth at him during the tournament.

“It’s a yellow card. It’s not a player – Mr Balotelli – who’s in charge of refereeing. It’s the referee who takes these decisions. Referees can finish the game. They have this power in case of racism.

“That is, I think, the best way to protect the game against racism. The referee has been given advice and he can stop the game if there are problems.

“We are shocked about racists, but we are trying to do something; we have to fight against that. I feel bad. Of course I feel bad because I am not a racist.”

Now, before the merde hits the fan, it may for all the world look like Platini is leaving leeway for a spot of good old-fashioned racism at Euro 2012, but he’s also said that matches can and will be suspended if the abuse is persistant.

Believe me, this definitely constitutes progress – after all, this is UEFA we’re talking about here; a group of heel-dragging atavists who’d describe tectonic plates as being ‘a bit nippy’.