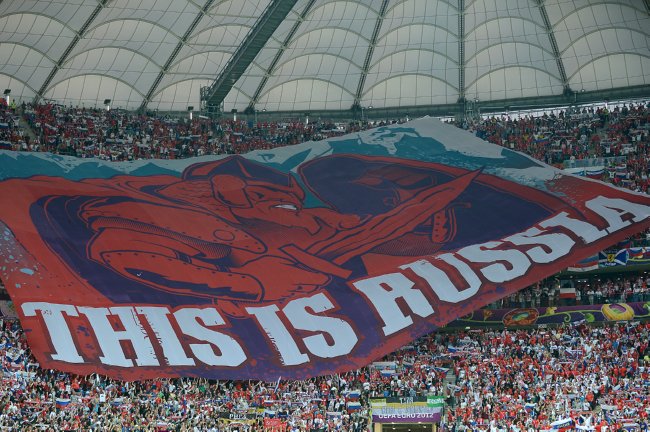 Those as ignorant as I may have found themselves rendered aghast by the sheer scale of the massive banner unfurled by the Russian fans during last night’s game against Poland in a ‘how the hell did they get that through the turnstiles’ kind of way.

However, racism monitoring group ‘Football Against Racism in Europe’ (FARE) reckon that it was all a little more insidious under the surface and even reported the flag to UEFA before the match – alerting them to ‘far-right extremist’ sloganeering.

Indeed, the Polish press are reporting that UEFA may fine the Russian FA over banner, with suggestions that it depicts Dmitry Pozharsky – a 17th century military commander who led Russia against a Polish invasion in the early 1600s.

UEFA have since confirmed that they are to launch an investigation into the banner, though it’s at the back of an ever-lengthening queue; behind the monkey chants aimed at Dutch players, Mario Balotelli and Czech right-back Theo Gebre Selassie and the 183 arrests made after Russian fans brawled with Polish fans after the game in Warsaw last night.