Here’s one you may have missed at the time (we certainly did); Not for the first time in his life, Nicklas Bendtner dropped trou last night – specifically to celebrate his second goal in Denmark’s fantastically entertaining 3-2 defeat to Portugal – duly exposing a pair of green pants with a rather noticeable waistband… 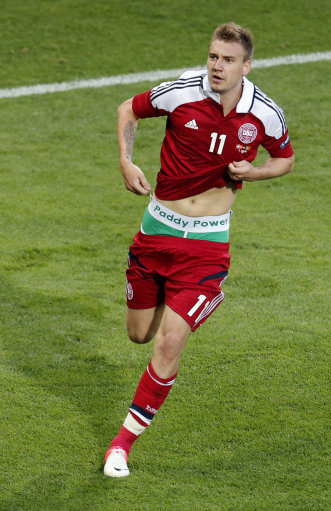 Ken Robertson of Paddy Power then immediately issued a statement congratulating Bendtner after the game:

“I’m truly delighted for Nicklas, what a stunning performance tonight. I’ve no doubt that the luck of the Irish thanks to our lucky underpants helped him find the back of the net twice!”

… which pretty much revealed the whole thing to be an ‘ambush marketing’ stunt.

According to several papers, UEFA have come a-knock-knock-knockin’ on Bendtner’s door this morning with a probe thought to be imminent – with UEFA obviously narked that someone other than them would be receiving advertising revenue during Euro 2012. A big no no.

That said, the rules are very clear about this sort of thing – just ask Robbie Earle.