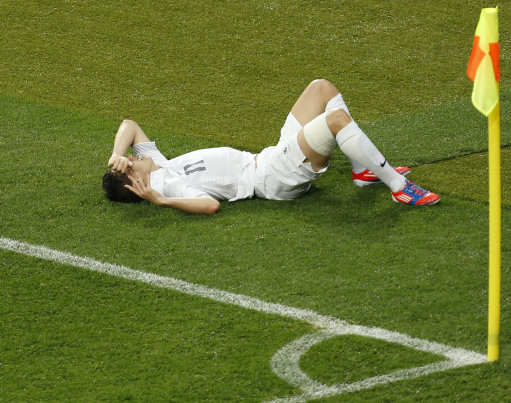 With France having just wibbled out of Euro 2012 after failing to locate their collective testes amid 90 minutes of tawdry Spanish attrition, Samir Nasri bade the tournament farewell by sounding off on a French journalist who had the temerity to ask the midfielder for his opinions on the Gallic merde-fest he had just been part of.

Initially Nasri wafted straight through the media zone and onto the team bus without a word but, having returned to collect some personal belongings he had mistakenly left behind, a member of a French news agency asked the midfielder for a quote.

Nasri bleated: “You are just looking for sh*t, you are always looking for trouble,” to which the reporter replied with a simple: “Get lost!”

This tipped Monsieur Precious Pants over the edge, who flew into an avalanche of foul-mouthed whinnying: “Go f**k yourselves. You write crap stories, so f**k you! F**k your mother, you son of a bitch. Now you will tell the world that I’ve been badly brought up! Come [outside] and let’s fix this!”

Aw Samir, it’s nice that you tried to be all haughty taughty and passionate, but we all know you couldn’t windmill slap your way out of a wet paper bag.