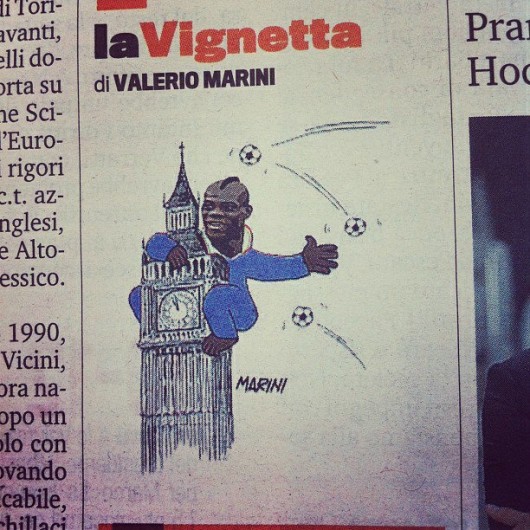 Italian newspaper Gazzetto dello Sport have been backed into issuing a kinda sorta apology after a caricature of Mario Balotelli imagined as King Kong swatting flying footballs away from the top of Big Ben was published in Monday’s edition following Italy’s win over England the night before.

”Some of our readers have protested regarding Valerio Marini’s cartoon. Balotelli was depicted as King Kong. We can honestly say it was not among the best products of our talented cartoonist. At this time, a measure of prudence and good taste are necessary because everything, absolutely everything, can be misinterpreted.

”The newspaper is for those who read it and hence, if certain readers found the cartoon offensive, we apologise.

“But those that accuse Gazzetta (and poor Marini) of racism are going overboard. This newspaper has fought any form of racism in every stadium and has condemned the boos directed at Balotelli as an unacceptable form of incivility.”

There’s a non-apologetic apology if ever we saw one.

As is usually the case with these things, it would appear that Balotelli hasn’t actually been canvassed for his opinion on the matter as the outrage continues to swell and froth on his behalf – though the Guardian have gone as far as speculating that he may be ‘unhappy’ with the cartoon.