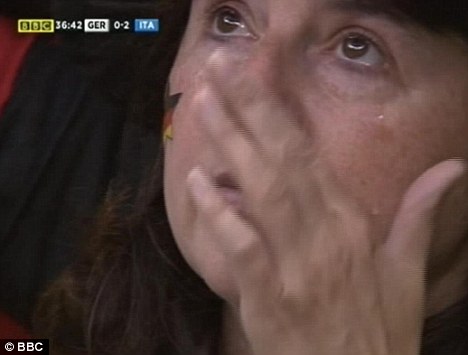 UEFA are to be flayed at the first light of dawn after being caught out splicing pre-recorded footage of a German fan crying into their live broadcast directly after Mario Balotelli had scored his second goal against Germany in the Euro 2012 semi-finals.

Immediately after Balotelli’s goal, the camera cut to a lady in the stands with tears streaming down her face – the only problem being that the emotional scene was recorded during the national anthems, during which she had become overawed with national pride.

UEFA’s jig was up when the woman, Andrea from Dusseldorf, began receiving e-mails from friends at home in Germany wondering why she was so distraught despite there being almost an hour left to play.

Asked to explain the debacle, UEFA told AP that it was “striving to show the human story of the game” and had “no aim whatsoever to exercise any form of control over the images delivered to broadcasters.”

They also claimed that the footage of the tearful Germany fan was shown “to translate the emotion and the tension of the German fans for this game, but that they’d issued specific instructions that the reaction footage not be used “directly in a chain of replays of a live action, to avoid any misleading understanding.”

German broadcasters ARD first contacted UEFA over a similar incident where Jogi Löw was seen playfully poking a ball from under a ballboy’s arm halfway through Germany’s group game against Holland. ARD’s suspicions were piqued as they had noted the actual incident took place well before the game kicked off.

UEFA’s defence was that the editorial team used ‘relay wipes’ before and after the sequence, which apparently made it perfectly clear Jogi’s jape was not live.