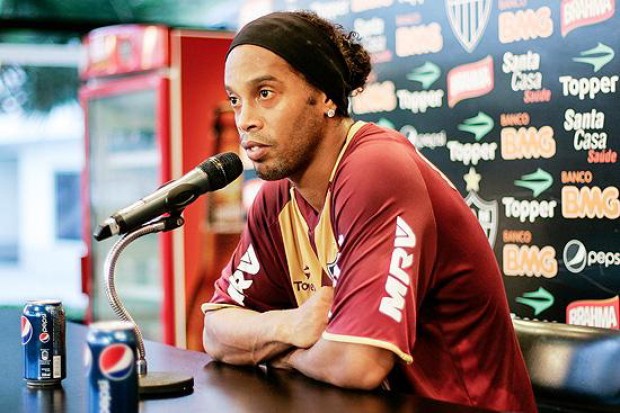 Pepsi and Coca-Cola are still at each other’s throats after all these years. Who knew? Word is coming in from Brazil this morning that Coke have pulled the plug on Ronaldinho’s $750,000-a-year sponsorship deal after he gave a press conference for his latest club, Atletico Mineiro, from behind a couple of cans of Pepsi – Pepsi being an official sponsor of Mineiro and all.

Ronaldinho also took a brief swig from the Pepsi (horror beyond horror!) which proved to be the final straw, with Coca-Cola issuing the following brief statement: “Coca-Cola recognises the career and the value of Ronaldinho. However, due to recent developments it has become impossible to continue the partnership.”

It is also being reported that Coke were just about ready to tear up the contract anyway, with a string of lackadaisical performances for Flamengo and a sprinkling of webcam-based debaucheries, etc, leading the company to believe that they perhaps weren’t quite getting their money’s worth out of ‘Brand Ronaldinho’.

Oh well, we imagine it won’t be too long until Pepsi come calling.