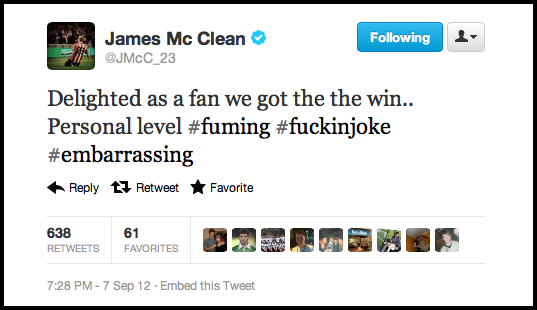 Republic of Ireland striker Kevin Doyle has revealed that he and the rest of the lads have been tearing strips off winger James McClean after the prima ballerina threw a tantrum at being left on the bench by Trap for Ireland’s 2-1 victory over Kazakhstan on Friday.

McClean took to Twitter during the game, telling the waiting world that he was ‘fuming’ and that it was a ‘f**king joke’ that a 23-year old nobody with three decent games for Sunderland under his belt should be made to suffer the indignity of having to start as a substitute for his country.

“We said it to him straight away, you know, it’s not acceptable and he knew that as well. He realised that within minutes, you know, he tried to delete it and I think he’s shut down his twitter now and everything.

“It should be a help to him. But he was massively apologetic and we ended up the next day joking about it, you know it was fine. It was just a rush of blood to the head.

“It’s been good because it’s probably got him integrated into the group a bit more because we’ve all been taking the piss out of him about it for the last few days.”

From what we hear McClean has been very apologetic for his little shitfit, though it’s not the first instance of him acting like a self-entitled brat. Just where and how, over the course of his fairly average eight-month top flight career does he think that he’s earned the right to start calling the shots, especially at international level?

Grow up and knuckle down.