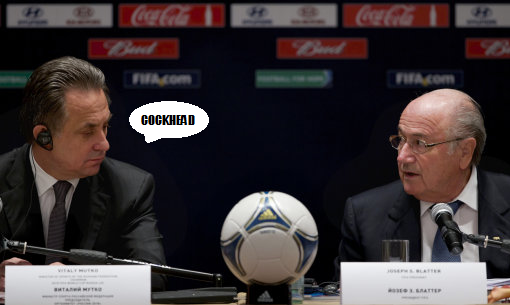 Bless his deluded little cotton socks, Sepp Blatter thinks he gets booed everywhere he goes because he’s – and we quote – “a star”.

Just let that sink in for a moment, then read these quotes from Sepp after being asked by the Guardian why he thought the 80,000-capacity Wembley crowd almost universally booed him during the womens’ football medal ceremony at the London Olympics last summer:

“This was just a very, I would say, a small boos. Stars are always booed so I’m a star, you have to take it this way.

“I thought that the public in the Olympic Games, they would be a little bit better educated.”

Oh Sepp. Let us count the ways in which you are utterly and entirely wrong.

That’s some classic Blatter delusion-piled-atop-delusion right there. In the space of three incredibly brief statements, he’s somehow managed to completely skip over a cauldron-full of loathing directed solely at him, anoint himself as a global celebrity and insult the intelligence of the entire general public.

Blatter also went on to say that once he hands in his badge and gun at FIFA, he plans to “live a dream he had when he was a young boy” and snag himself a job as a football commentator/pundit.

Never has Steve Claridge seemed so witty and insightful.