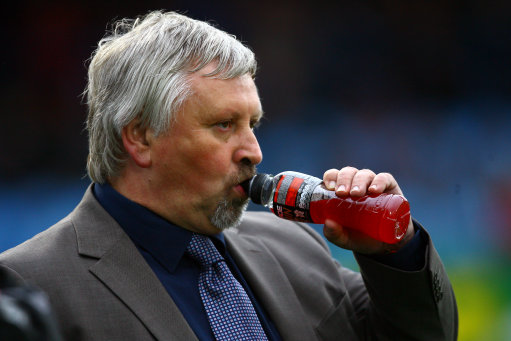 “This stuff tastes like shite. Got any Irn Bru laddy?”

You’ve got to give it to Southend United chairman Ron Martin, the guy’s obviously got huevos the size of cantaloupe melons.

With The Shrimpers six points off the League Two play-offs, Martin saw fit to sack manager Paul Sturrock on Sunday, citing the club’s dodgy form of late having won just once in their last six matches. Harsh, yes, but given the current “sack everything that moves” climate, Sturrock’s canning hardly came as a major surprise.

By the way, if you’ve got a moment, we thoroughly suggest you pick through Martin’s monumentally feeble club statement.

Martin and Southend then went and appointed Phil “do not adjust your screens, he really is that colour” Brown yesterday, with the creosote-coated former Hull City boss set to take charge of his new side for the first time when they play Bradford City this coming Friday.

However, in the interest of being “fair and just”, Martin then offered Sturrock the opportunity to come back and take charge of Southend for the Johnstone’s Paint Trophy Final the following week on April 7th as a one-off “privilege”, seeing as though it was he that guided The Shrimpers to Wembley in the first place.

First of all, what a toolbag of a chairman, and second of all, here’s hoping that Sturrock actually goes and wins the damn thing.