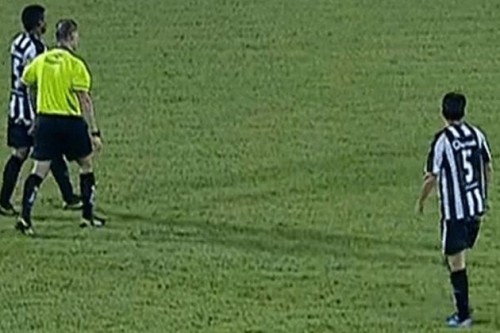 Brazilian side Uniao Barbarense have sprung a new one on us after admitting to deliberately sending out two players wearing the same shirt number on their backs in a bid to befuddle their opponents.

Having played the first half of their recent Campeonato Paulista Serie A2 fixture against Linense wearing his officially assigned No.7 jersey, Uniao Barbarense tried to pull a fast one by sending midfielder Claudio Britto out for the second half wearing the No. 5, the same squad number as defender Rafael Silva.

Barbarense managed to get through an impressive 26 minutes of the second half with two No.5s on the pitch, until the referee noticed the ploy, ordered Britto to go and change his shirt (he subsequently donned his third shirt of the match, the No.17 jersey – which must be some kind of record!?) before booking the midfielder for his part in the subterfuge.

Britto told Sportv after the game: “They were on the attack and we used all the tricks we could to keep them at bay. It was our strategy and it worked.”

Stretching the definition of “strategy” there, but it’s tough to quibble with Britto’s hubris. Barbarense won 3-2!