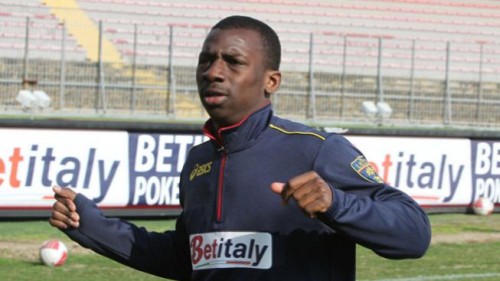 It’s just wonderful when delightfully heartwarming yarns like this fall in your lap of a morning.

It seems like Lecce winger Ousmane Dramè had a fairly eventful Monday night, after details of a sordid little sex romp came to light the following day after the whole shebang went tits up (presumably literally) for the 20-year-old Frenchman after he solicited the services of a prostitute in the Porta Rudiae district of the Italian city.

Dramè reportedly agreed to give the young Nigerian lady his iPhone in return for a bit of slap and tickle but shirked on the deal afterwards, stealing her purse and attempting to make his getaway on a conveniently placed bicycle.

It was then things took a turn for the even weirder. Italian news agency ANSA published the details on Monday:

“A Lecce soccer player was charged Monday for stealing a purse from a prostitute and fleeing by bicycle after reneging on a deal to give her his iPhone 5 for sex.

“Ousmane Dramè, a French national and striker for the third-division club, was reportedly chased down by a transsexual friend of the robbed Nigerian streetwalker after the incident early Monday.

“Police also charged Dramè with injuring the transsexual when he allegedly tripped him as he tried to wrest the purse from his hands.”

Lecce then issued a statement on their website confirming that Dramè had been suspended by the Serie C side and that his contract would be torn up if the “facts were confirmed” by the imminent police investigation. Lecce also hinted that they may take legal action against the young French forward for tarnishing the club’s image.

Still, what a Monday night! Now there’s a story to tell the grandchildren!