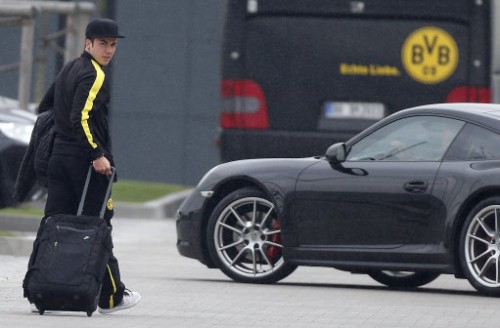 Despite having just pressed the flesh over a €31.5million move to Bundesliga top dogs Bayern Munich, it’s not all rainbows and unicorn sighs in Mario Götze’s world at the moment, with reports in Germany that his family are being traumatised by angry Dortmund Ultras.

After the deal was announced by Bayern on Monday morning, Götze himself had to leave Dortmund training with a police escort to evade outraged BVB fans who had congregated outside the club’s training facitilies, though it would appear that his little brother had it that bit rougher.

Apparently, while Götze was being abused left, right and centre on Twitter for being a “traitorous Judas rat”, his jüngeren Bruder was forced to leave school early after taunting and constant bullying from other students over his brother’s imminent transfer to rivals Bayern.

Kids can be so cruel.

He then returned home to find that the family house had been vandalised by Dortmund hoodlums, who spray-painted their heartfelt sentiments all over the place.

We should point out that nothing has been confirmed and Dortmund are yet to comment so it could all be hokum, but it certainly sounds like the kind of thing that utterly perspectiveless (is that even a word?) football fans would do.

We must admit that it didn’t seem like Götze was being booed all that much at the Westfalenstadion last night but just in case it is true, allow us to commend the BVB nutjobs on their handiwork: Good stuff. Stay classy.