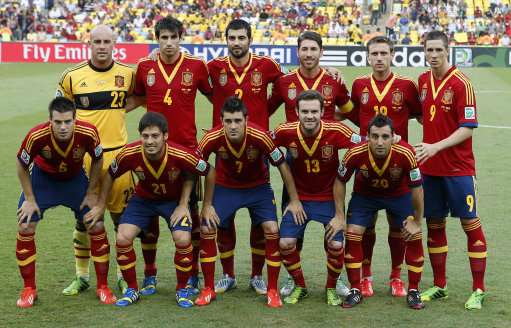 Brazilian website Globoesporte.com are claiming this morn that the money that was reported stolen from members of the Spanish national team in Recife after their Confederations Cup victory over Uruguay last week came about as a result of a strip poker tournament gone awry.

As confirmed by FIFA, six Spain players had money and possessions nicked from their hotel rooms following the 2-1 win over Uruguay, though now it would appear that the robberies occurred during a night of gallivanting with a group of assorted ladies of ill repute at the Hotel Golden Tulip Recife Palace.

This from Globo Esporte:

“Following last week’s reports, officials at the hotel called employees into a meeting to determine whether any of the staff had committed the crimes. After the employees professed their innocence, the hotel took to examining security cameras and determined the Spanish players were not telling the whole story.

“The cameras showed numerous women entering the players’ rooms, where members of La Furia Roja had hired a band to play pagoda and were drinking beer and Caipirinha. When the band ceased playing around 1:00am, five members of the team and one member of the technical staff brought a group of women to another room and began playing strip poker.”

Apparently the players in question then woke up the following morning and realised they were about €1,000 light, with the Spanish national team’s security chief, Raul Jimenez, watching the CCTV footage and then striking a deal with the PR manager at the Golden Tulip Hotel, who agreed to deny the incident had ever taken place.

However, the golden silence obviously didn’t last long as Brazil’s Secretary of Social Defense has asked the Tourism Police to launch an investigation into the incident.