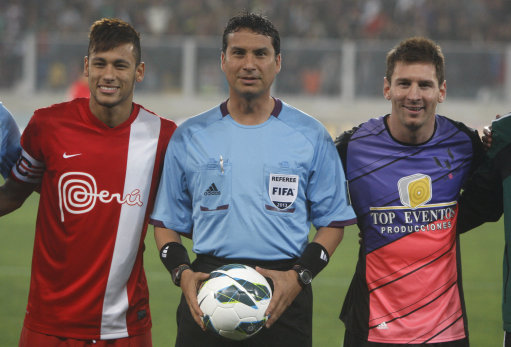 Lionel Messi has been accused of “attempting to defraud American citizens” after the Los Angeles leg of his “Messi & Friends” world tour was cancelled just over 24 hours before it was scheduled to kick-off.

The exhibition tour hit Lima last night with Messi, Neymar, Dani Alves, Ezequiel Lavezzi and Eric Abidal among others turning out to play in the Peruvian capital, though backstage things were going awry as promoters were busy pulling the plug on the match scheduled to take place in LA the following evening (i.e, tonight, 3rd July) despite stating on their official Twitter account that the game was still on a few hours earlier.

Apparently the match, which was due to take place in the LA Coliseum, was pulled when it emerged Messi wouldn’t be taking part, despite all the proceeds (tickets cost as much as $300) going to his eponymous foundation.

“In all the years I’ve been doing live events, I have never encountered a situation like this. It’s unfortunate because the only losers in this scenario are the fans that were looking forward to the game, and the City of Los Angeles.” (Ralina Shaw, vice president of public relations at El Padrino Spirits, Inc)

“After hours of trying to convince Lionel Messi’s management team to fulfill their contractual agreement and come to Los Angeles, it is clear they have no respect for these fans and this market. We feel that this is a blatant attempt to defraud American citizens and businesses that sponsored this event.” (Todd Graham, CEO of El Padrino Spirits, Inc.)

That’s some serious doohickey, especially as it’s estimated that an impressive 45,000 tickets were sold for the match – which has now been officially listed as cancelled.

Messi himself is yet to comment, but there are rumblings that the whole thing is one gigantic scam being precipitated by the promoters due to the woefully inept scheduling (Messi was due to fly from Peru and land in LA three hours before kick-off) and a decidedly dodgy-looking teaser viral which contains unlicensed Nike footage, a couple of grammatical errors and – and here’s the kicker – also lists Jose Manuel Pinto as “one of the 28 best soccer players in the world”…