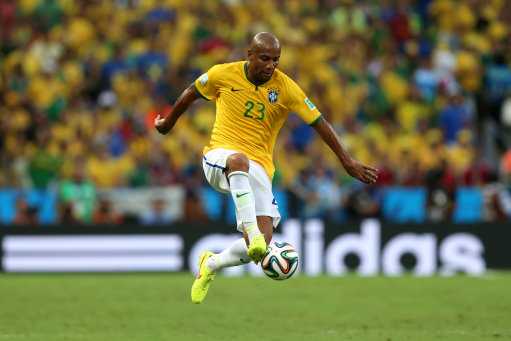 As you may or may not be aware, Maicon was dropped from the Brazil squad and sent home earlier this morning, with the official line being that the full-back had been axed for a “serious breach of discipline”.

It has since emerged just what the aforementioned “serious breach” entailed and, frankly, it’s really rather disgusting.

It is being reported that Selecao teammates Maicon, Elias and Oscar all went out drinking in Miami on Sunday following Friday evening’s friendly against Colombia, with all three getting roaring drunk at the ‘From Dusk Till Dawn’ nightclub.

Indeed, Elias got so plastered that he pretty much ended the evening unconscious having managed to get the three Brazilians kicked out of the club by urinating on the floor in a drunken stupor.

Annoyed at having their partying session curtailed by their pissed-up cohort, Maicon and Oscar decided to get their revenge on Elias by pranking him after he passed out back at the team hotel.

This from Olé do Brasil:

“Very angry, the two athletes combined to make a kind of trick, in order to take revenge of Elias.

“Maicon came up with an idea for a joke, but Oscar felt too tired and declined to participate. Thus, Maicon played the cruel trick alone.

“After carrying Elijah – still unconscious – back to the hotel, Maicon requested two ingredients from the hotel kitchen that if used in the wrong (and cruel) manner, can cause a frightening result: pepper and condensed milk.

“The Monaco right-back returned to the Corinthians player’s room and spread the two products in the anus of Elijah.

“The goal was to use pepper cause burning on site.”

First of all, gross.

But wait, the prank gets even better!

Again according to Olé, Elias had no recollection of the night’s events in the morning and was slightly concerned about the burning sensation in and around his anus (there’s definitely a “butt of the joke” quip in there somewhere).

It was at this point that Maicon informed Elias that he had been raped by four men in the nightclub toilets after staggering off on his own.

Terrified, Elias promptly told Brazil coach Dunga what had happened and arranged for the CBF medical staff to run tests on him for sexually transmitted diseases.

A few minutes later, Dunga asked Maicon to describe Elias’ attackers so he could inform the local police.

Realising that his hilarious prank was starting to get out of hand, it was at this point that Maicon came clean and confessed.

Thereafter, Dunga and the rest of his CBF technical committee held an emergency meeting and decided to send Maicon home immediately for being such a caddish bounder.

UPDATE: Turns out that Olé do Brasil is a parody news site, so Maicon may not actually be quite as gross as first thought.

We should’ve known that little 14-year-old Oscar is far too innocent and angelic to get embroiled in such mucky nastiness.

Oh well, we still choose to believe it.