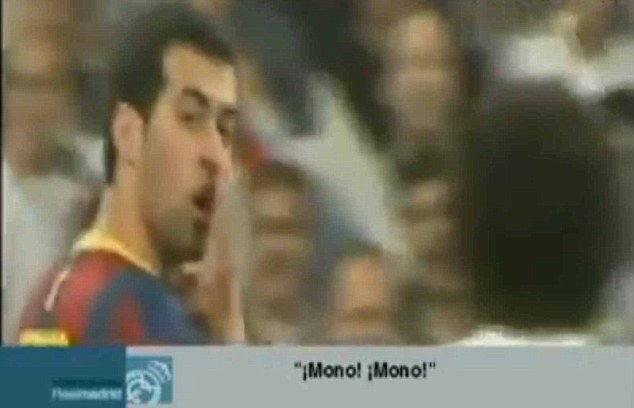 As you may have seen yesterday evening, UEFA have decided to open a disciplinary case against Sergio Busquets after the Barcelona scheister appeared to racially abuse Real Madrid full-back Marcelo during the first leg of the Champions League semi-final between the two sides – charges which mean that, if found guilty, Mr Biscuits will miss the final on May 28th.

Busquets has since defended himself, claiming that rather than muttering ‘mono mono’ (‘monkey monkey’) to Marcelo from behind his cupped hand, he actually said ‘mucho morro’ – which translates as ‘some nerve’.

Anyway, Barca vice-president Josep Maria Bartomeu is up in arms about the matter at hand – not about the actual alleged racism itself, oh no, but about the fact that Real Madrid had the low-down temerity to report it to UEFA, telling RNE:

“It appears that Madrid is not doing this and they are losing this señorío (distinguished air) that the club has always had. I don’t want to talk about the issues of a club that is not mine, but I will just say that we would never do it because it appears to be an exaggeration to us.”

“I don’t understand why Busquets should miss out on the final.  That’s something that surprises us a lot.  The referee is the one who makes decisions on the field.  Depriving Busquets, who is having a sensational season, of the final seems very excessive to us and we’re very upset.

“I don’t know what Señor Busquets said and what they were talking about, but they are things that happen all the time in football.  If we have to put a camera on each player to follow what they say or do, this will become a circus.  Football has triumphed, along with fair play.”